WHAT CAN SMALL FSIS INSPECTED PLANTS DO TO ELIMINATE HUMANE HANDLING VIOLATIONS?

This is an update from a blog posted in April 2016

The discussion continues and has been taking place for some time.  Large vs Small.  Do large meat plants produce safer meat or is it the small operators?  The large companies boast better resources, say they are more technologically advanced and keep people on staff who devote 100% of their time to monitoring the manufacturing process.  Small facilities also have advantages.  The owner's name is on the product or his/her reputation is directly connected to it.  Batch sizes are smaller.  If an error is made it may involve only 50 to 100 pounds of product not 100,000 to 1,000,000 pounds. The small plant owner has a personal relationship with employees and more of a direct connection to production and to his/her customers.

The same back and forth has found its way into the issue of the reason for more Humane Handling Violations documented by FSIS in small and very small plants relative to the larger plants.  It has been stated the reason for the disparity is that small plants lack the robust programs that large plants have in place. Are there other factors involved?

I believe there are. A significant reason is because of the physical difference in size.  This is not to say bigger is better.  The reason is a difference in degree of government oversight.  Basically, the difference in the ratio of inspectors/animal. Envision the inspector per animal ratio in a 2000 animal per day slaughter plant in comparison to a 20 per day slaughter plant.  The USDA has some work to do in this area to correct this disparity.  Please don’t misinterpret this statement to call for more FSIS oversight; but, actually less oversight in the small facilities to even out this disparity.  In the meantime, what can the small plant do to help themselves?

1.   Captive Bolt Gun-utilize the most powerful gun with the strongest cartridges and the longest bolt.  Keep the gun clean.  Most manufacturers recommend weekly cleaning.  I personally recommend daily cleaning.  Do not use WD-40, use gun cleaning solvent.

2.   Electrical Stunning (Hogs) - ensure proper amperage, time and placement based on type and size of animal. The website www.Grandin.com has information on this.  The head only electrical stunning produces an epileptic seizure that is reversible.  The animal must be bled within about 15 seconds. The head to heart (cardiac arrest) stunning is irreversible.  The recommended bleed time is within 60 seconds.  If a small plant’s stunning instrument has only the spurs the individual should then stun the animal in the cardiac area (armpit) to ensure the hog does not return to sensibility.  Furthermore, voltage regulated stunners are inferior to amperage regulated stunners.  In voltage regulated stunners the amperage applied will vary based on variability in resistance of the animals due mostly to fat thickness; although there are other contributing factors to variability in density.

3.   Stunner (Individual)-proper training is essential.  The characteristics of the individual is also important. This is described in an excellent article in a recent National Provisioner as the “proper culture.”  He/She needs to be able to work under pressure.  I also look for the individual that is willing to do the job with confidence but does not proclaim to “liking to kill.”  From my experience the person that “likes” to kill will crack under pressure.  The proper culture needs to be encouraged and maintained.

4.   Maintenance of Equipment-Contact points on the tongs on electrical stunners for hogs and sheep need to be shiny and clean and placed in the correct area on the animal.  I suggest emery cloth instead of sandpaper.  Stunning tongs should be kept in a warm dry environment.  Furthermore, keep the electrical stunning equipment dry.  The control box must be pugged into a grounded receptacle and the control box should have a dedicated electrical circuit.

5.   Head Restraint-This is especially useful in beef when using captive bolt.  It minimizes head movement and does not result in any unneeded stress in the animal.

6.   Correct Placement of the Captive Bolt-At the end of this article are images copied from the FAO (Food Agricultural Organization) website that may be helpful.

Know the signs of insensibility-

In electrically stunned pigs, look for normal blinks which look like blinks on a live pig.  The following are not blinks:

There are images at the end of the article to demonstrate correct placement of the captive bolt for the various species of beef, pork and lamb.

The image of the hog's head clearly shows the placement and angle for the captive bolt to penetrate the hog’s brain.

When being instructed on proper stun gun placement, one hears about the imaginary cross between the horns and eyes relative to beef.  The issue is beef animals are almost entirely polled (without horns).  The image below illustrates how one can use the “bumps” or “humps” that are just inside the horns (or where they would be) as guidance.

In regards to sheep, some believe the best placement is the frontal one similar to beef and pork.  On the contrary, is to the rear of the skull to better penetrate the brain with the captive bolt.

Keep two captive bolt guns on hand with a backup loaded and ready in case of a suspected misstun.  So called Security knocks are allowable by FSIS.  Some disagree with this statement but I refer to the HIKE (Humane Interactive Knowledge Exchange) 01-10 Scenario below which is still on the FSIS website. This particular scenario covers a situation where two (2) blows to the head are allowable.


You (IIC) then observe cattle being stunned. In one case two shots are required because after the first, the animal goes down and blinks its eyes twice but shows no other signs of returning to consciousness. The operator observes the blinking and applies a second shot as soon as possible after the first. Later in the same group of animals, the operator applies two knocks to another animal, but in this case, even though the animal is rendered unconscious with the first knock, the operator is unsure and applies a second security knock as a precaution.

You decide as a final part of this procedure you will talk to maintenance regarding the stunning equipment. They verify that the captive bolt equipment is cleaned and maintenance is done each shift.

As the IIC you determine that the plant is stunning animals in a manner consistent with 9 CFR 313.15 (a) (1). They are rendering the animals unconscious with a minimum of excitement and discomfort. All animals were unconscious following stunning. The plant appears to take the maintenance of their stunning equipment seriously which is important in a systematic approach to humane handling.

Finally, it may be wise for a small establishment to have a written human handling program.  Specifically, this is called a robust systematic approach to humane handling.  This program does not need to be complex.  It involves some monitoring of the activities described in the program and may include the occasional services of a third party auditor.  The program is based on FSIS Directive 6900.2.  In evaluating a program, FSIS is looking for (1) written (2) recordkeeping (3) periodic evaluation and (4) FSIS will look at the records.  The advantages of having such a program is in the event of a miss stun the establishment does not necessarily have to suffer from a FSIS Notice of Suspension (NOS).

In conclusion, if you are a small operator you will have intense government oversight. So take a few steps like the ones mentioned above to help. 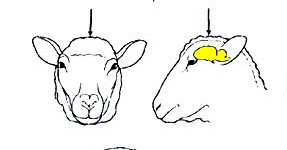