I am not an advocate of firearm stunning of animals in the meat industry.  For humane, operator safety and efficiency reasons, I believe captive bolt stunning for beef and electrical stunning for hogs is the best

.  Controlled atmosphere stunning for hogs in large plants work well because of economies of scale.  However, many small plant operators still prefer using firearms for stunning of livestock.

In October, 2016, I attended the NAMI Animal Welfare Conference.  One of the sessions I attended was a presentation by Jennifer Woods on the use of firearms and despite it is not my method of choice, I thought I would share the information presented for operators using this method.

The most common causes of failed stuns are:

Ideally, you want the bullet to maintain enough energy to effectively penetrate the skull of the animal, but not so much it passes right through.

As the bullet passes through the air it loses energy.  The further it travels, the less energy it has as it hits the target.  Therefore, close range shots will not require the same amount of kinetic energy as a longer distanced shot.

The caliber of the gun is based on the interior bore or diameter of the barrel.  The larger the caliber (greater mass) the more suitable it is for:

The firearm of gun will be either smooth or rifled (spiral grooves).

When a barrel is rifled, it causes the bullet to spin.  The more spin a bullet gets from rifling, the more stable it is in flight making for a more accurate shot, especially from a distance.

There are three main considerations when selecting a firearm and ammunition:

2.   Thickness of the skull

3.   Distance between the shooter and the animal

When choosing between a shotgun and rifle, considerations include:

·         Ammunition from rifles have a greater chance of passing through the brain and into the neck of the animal.  A shotgun slug with the equivalent energy will not

Handling and restraint must be adequate to ensure the safety of the operator and the welfare of the animal.

It is also important to keep in mind that in hogs the location of the brain is different in younger hogs as compared to mature animals as illustrated below. 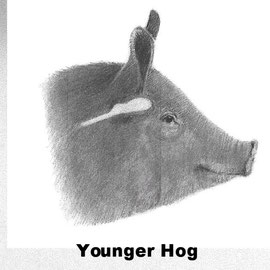 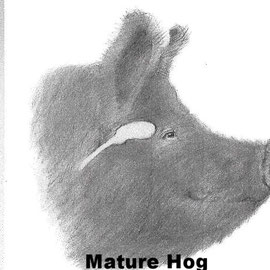 As with all equipment, it is wise to properly maintain firearms: